Last week, we had the pleasure of hosting chef Massimo Bottura, of Osteria Francescana, at The Cooking Lab while he was on tour promoting his first book, Never Trust a Skinny Italian Chef. He was joined at the table by a group of exceptionally talented, Italian-influenced chefs from this region: chef Suzette Gresham of Acquerello, chef Nathan Lockwood of Altura, chef Pino Posteraro of Cioppino’s Mediterranean Grill, chef Simone Savaiano of Mucca Osteria, chef Holly Smith of Cafe Juanita, chef Michael Tusk of both Cotogna and Quince, and chef Cathy Whims of Nostrana. We always look forward to events where we can meet and cook for chefs who inspire us. Chef Bottura undoubtedly falls into this category. His food validates his creativity, his love for his country, and his culinary philosophies. It also demonstrates that food is fun in signature dishes like the wabi-sabi-esque beauty of a dropped lemon tart and his tribute to the best part of the lasagna: the crunchy bits of pasta, which he serves in a deconstructed fashion with ragù and béchamel. All too often we hear, “Modernist food lacks the soul of its more traditional counterparts.” or “Foams are cold, sous vide is unappealing and lacking passion—we just don’t get Modernist cuisine.” Why can’t food be traditional and innovative at the same time? The work of chef Bottura illustrates that these concepts, tradition and innovation, are not opposing forces. Instead, they are nuanced layers we can use to construct a single, transcendent bite. The three-Michelin-star Bottura can, in fact, transport you to his mother’s kitchen on a wisp of mortadella foam. It is whimsical, yes, but the dish is also a dialogue about ingredients and a love story about one’s heritage. Chef Bottura’s now-infamous bollito misto non-bollito is deeply rooted in history but born out of honoring the past through new techniques. Instead of boiling tough cuts of meat, as tradition would strictly dictate, he cooks them sous vide to maximize flavor, tenderness, and nutritional content—an homage to the original bollito misto, a dish Bottura grew up with. Thick sauces are replaced by light foams of familiar flavors, smartly designed to complement, not hide, the meat. All of the classic flavors are vibrantly present, and this metamorphosis of technique allows chef Bottura to continue the evolution of Italian cuisine. We honored the gregarious chef with a menu that featured our own tribute to Italian flavors: Vongole, Cacao and Sea Urchin Pasta, Polenta, and Cappuccino. Our classic dishes were reworked so that each would give a subtle nod to Italian cuisine, including Pea Stew, with a delicate ravioli, and Basil Cocktail, with a splash of chef Bottura’s Villa Manodori Balsamic Vinegar.

And, of course, there was Pistachio Gelato. 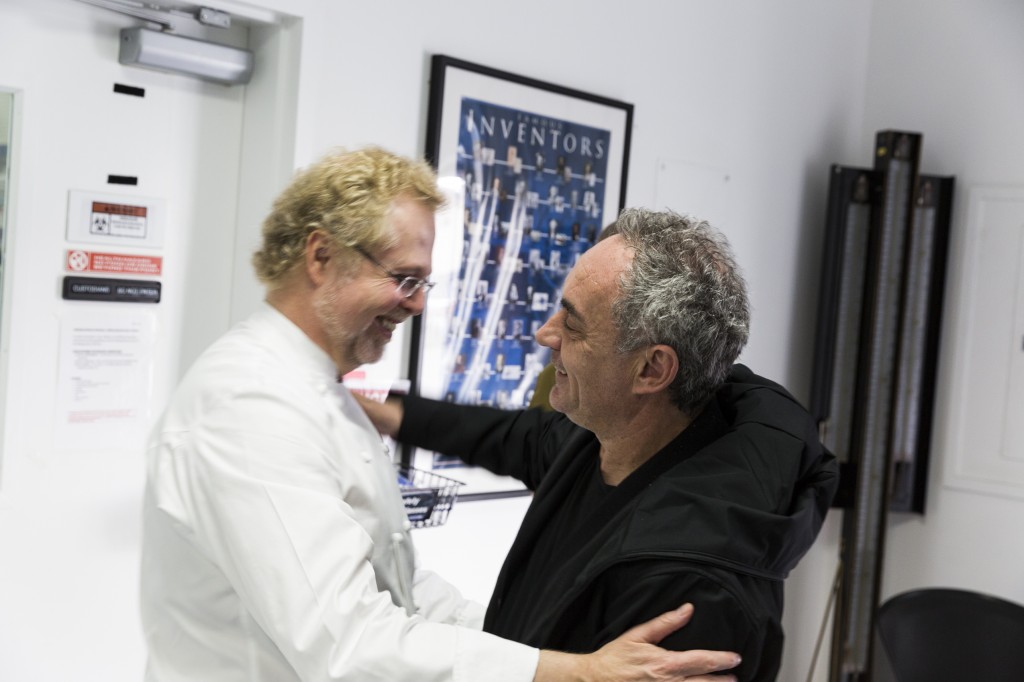